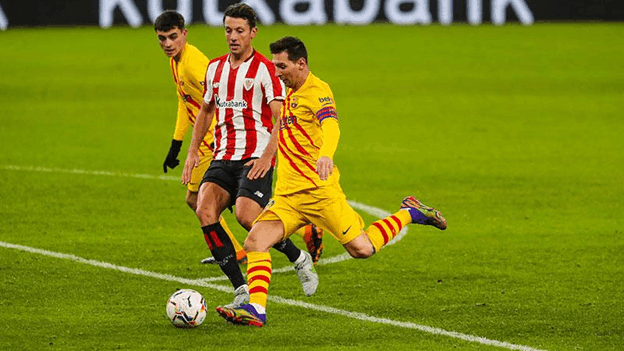 Lionel Messi was on the form of his game as Barcelona won 3-2 at Athletic Bilbao on Wednesday to finish third in La Liga.

Athletic got off to a dream start in their first match under new coach Marcelino. Inaki Williams reached the bottom of the ball and sped to the target, beating one of the defensemen in the third minute before shooting down the net.

Barca reacted quickly, however, with a sensational team goal, Messi delivered a superb pass to pick up Frenkie de Jong by the byline, and the Dutchman took the ball back across the area for 18-year-old Pedri to head home.

Messi and Pedri worked wonderfully to bring Barca ahead. The youngster caught an Argentinian pass before returning it with a delightful backheel. In the 38th minute, Messi rolled the ball to the bottom corner.

Messi hit again in the 62nd minute to finish another brilliant team move and missed a few opportunities to complete his hat trick, while Iker Muniain scored a tense final for Athletic in the 90th.

Messi had a relatively poor season according to his expectations, but his scores led him to nine goals for the campaign, making him a joint top scorer in La Liga.

Athletic forward Williams said his side played well, but he could not avoid Barca while Messi was in top form.